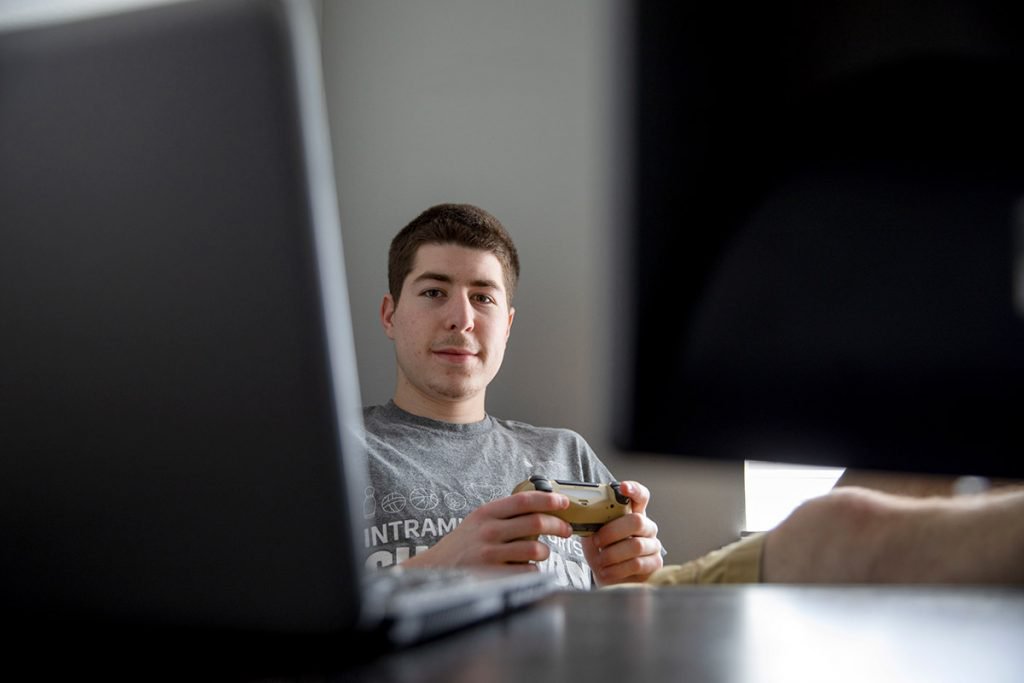 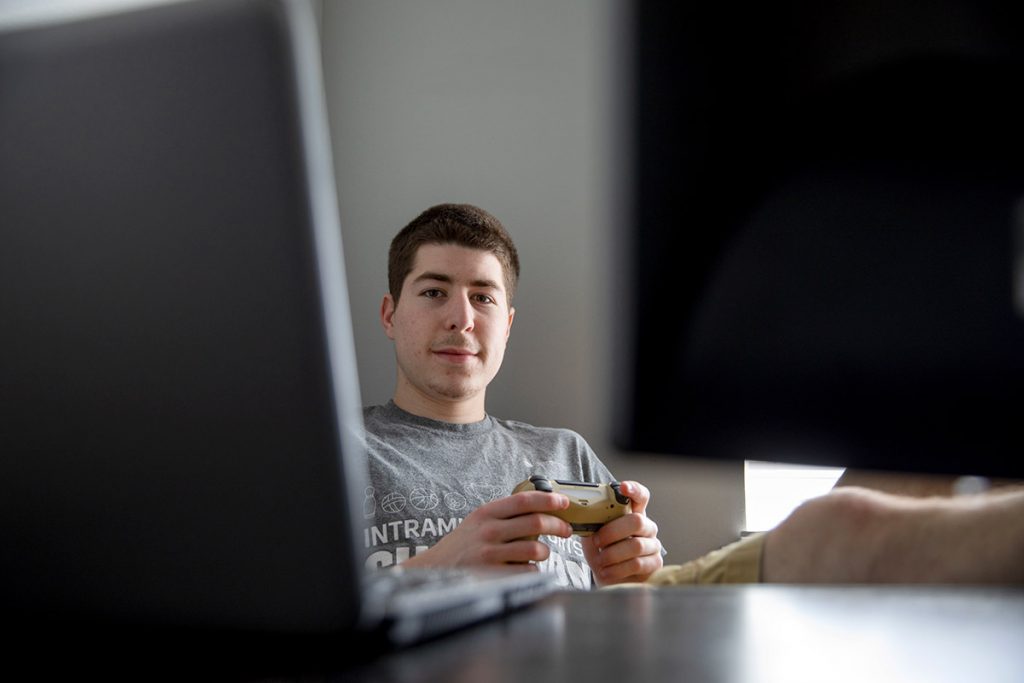 It was overtime, a tight match-up between the Philadelphia Eagles and the New York Giants. The Giants had third-and-3 at their own 30.

Then, a miracle play: a catch-and-run with a perfectly executed juke of a Philly defender. The announcer screamed, “We have a walk-off. Ten. Five. Touchdown!”

Christian Lomenzo, 21, set his controller down in shock. He stood up, put on his Giants cap and raised the Madden Challenge Championship belt above his head. He had just won his first major video game tournament.

When Lomenzo started playing games at 8 years old, he never thought of gaming as a career path or a way to make money. Like most Americans, he played for fun and with friends. Even until the very last play of the Madden NFL championship, he wasn’t really thinking about the money.

“Going into the tournament, and during the tournament and even during the play before I won, the last thing on my mind was winning,” said Lomenzo, who goes by the moniker Chritobin online. “All I was thinking about was getting the first down.”

Video game tournaments, such as Electronic Arts’ (EA) Madden Championships, have never been more popular, and gaming companies are raking in the profits. Though it’s considered a pillar company of the gaming industry, EA’s competitions are dwarfed by companies like Riot Games, the makers of League of Legends, and Blizzard, the makers of StarCraft and Warcraft. Their esports events are international spectacles.

But First, What Are Esports?

Simply put, esports are video game tournaments with highly skilled players who are considered  athletes. EA flew Lomenzo to California for an all-expenses-paid trip to play in the Madden Championships at its brand new, state-of-the-art esports broadcast studio. For international tournaments, players are granted esports visas to travel and compete.

The video games themselves don’t necessarily have anything to do with actual sports. Some of the most popular games are called Massive Online Battle Arenas (MOBAs), which are usually fantasy or sci-fi in nature, or First Person Shooters (FPS), which tend to be more realistic, wartime games — or a mixture of both. (See: Apex Legends and Overwatch.) These games are typically played on the PC and are team-based. They have objectives as simple as eliminating the other team or as complex as plotting hours-long strategies to capture an opponent’s base.

They’re approachable enough for everyday gamers to play, but professionals spend thousands of hours learning the intricacies of the games’ design to develop heightened reflexes and sophisticated strategies.

Of course, there are plenty of video games about sports too, like FIFA, Madden, NBA 2K and UFC. Just like real sports, there are millions of fans who to tune in online to watch these virtual athletes running, kicking and wrestling.

But those MOBA tournaments are more popular. A lot more. Hundreds of millions of worldwide fans watch them, rivaling the viewership of real-life sporting events.

The 2018 League of Legends World Championship was held in South Korea, and at its peak reached 200 million viewers. The 2018 Super Bowl, by contrast, drew a little more than 103 million.

What all this means is that there are ever-growing ways to make money playing video games — but not only in playing them. Video-game-related careers are surging. For big-ticket tournaments, there’s a need for announcers, scouters, coaches, marketers, broadcasters and all of the necessary people to create and maintain the video game. Augmented reality, virtual reality and video game data analytics are career paths poised to explode in the near future, as well.

By winning the penultimate Madden Championship, Lomenzo raked in $35,000 and automatically qualified for one of 16 spots in the Madden Bowl. The first-place prize for that competition is $40,000, but every contestant on the roster is guaranteed something. Even the player who places 16 out of 16 will walk away with $5,000.

Compared to the bigger tournaments, the Madden Bowl’s cash prizes are peanuts. The winners of the 2018 League of Legends (LoL) championship earned $2.4 million (out of a prize pool of about $6.5 million). In LoL, the teams include five players, meaning each player could win upward of $500,000 for the championship match.

Later this year, Epic Games is holding the first ever Fortnite World Cup in New York City, and it’s offering a total cash prize of $100 million over the course of all qualifying rounds, finals and the main event. In 2018 alone, Epic Games banked $3 billion in revenue for a game that is completely free to download and play.

As video games become a prime source of entertainment, the industry is making more money than it knows what to do with.

Edward Castronova, a video-game economist, author and media studies professor at Indiana University, predicts that by the mid 2020s, these free-to-play gaming companies will actually pay casual users to play.

In a whitepaper Castronova penned in 2016, he argued that the effects of automation and AI will transform video gaming into a viable job option for displaced workers. And his predictions already seem to be coming true.

Such large cash payouts for tournaments are evidence that the gaming industry is flirting with a business model that pays its players. But what Castronova expects to see is not the pros getting all the money, but the everyday gamers.

“The companies will pay them small amounts to just be there, in the game, while the big shots make all the noise,” Castronova said. “Those [casual gamers] are the people who will have viable low-wage jobs from video games.”

To prepare for this future economic shift, “pay as much attention to your gaming literacy as you do to literature, art, music and film,” Castronova said.

In the meantime, gamers who are looking to earn money will have to make do with a more sporadic payment system.

Let’s be clear: Most gamers won’t make $35,000 per match. Such big prizes are reserved for an elite few. However, there are video game tournaments that reward above-average players with prize money.

That’s how Lomenzo got his start. Before his days of Madden fame, he would make a few bucks here and there in smaller video game tournaments.

“I really like playing against other people to win something,” Lomenzo said. “I would just play for $1 wagers when I was 14 years old.“

And as he grew, so did his cash prizes.

Start in small video game tournaments to sharpen your skills and earn some cash along the way.

Below are some tournament websites that Lomenzo used to get his bearings. You can earn anywhere from $1 to $10,000 per match.

(Note: some states such as Arizona, Iowa and Louisiana ban cash-prize competitions. Users who pay to enter a competition must be at least 18 years old.)

A broad mix of tournaments are available on GamerSaloon. Typical, small matches could earn you $9, whereas the larger tournaments pay up to $10,000. Several matches require a small entry fee, which goes into the cash pot. But if you don’t want to fork over any money, stick to the free-entry tournaments.

Not all winnings in MLG GameBattles are cash. Some tournaments pay in achievements, trophies or credits. The tournaments that do pay cash can be quite lucrative. It’s common to see daily competitions with prizes of $100 to $400.

If you got beef with another gamer, Players’ Lounge is the place to settle it. Here, you can challenge other players to a head-to-head match and make a wager from $2.50 to $500. Or, if you’d prefer, join tournaments at your leisure. You get free admission to your first tournament, after that, it typically costs $1 to join a cash-prize match.

With over 3 million registered gamers, World Gaming is one of the largest competitive gaming websites. It hosts both free-to-enter and pay-to-enter tournaments with varying cash or token prizes. Weekly tournaments offer cash prizes typically between $100 and $200.

Both a marketplace for virtual video-game items and a competitive gaming platform, XY Gaming runs on virtual coins and cash. There are free-to-play tournaments with cash or coin prizes every month. Or, you can use your coins (you get 2,300 for signing up) and cash to join tournaments daily. If you’re feeling extra competitive, feel free to challenge other users to a head-to-head battle.

While Lomenzo remains hopeful his recent Madden win is the beginning of a long career in esports, he’s deciding to play it safe: He’ll practice gaming when he has the time.

For now, his main focus is graduating from Florida Polytechnic University with a bachelor’s degree in business analytics.

Adam Hardy is a staff writer at The Penny Hoarder. He writes about the gig economy and ways to make money that don’t involve stuffy, corporate offices. Read his ​full bio here​, or say hi on Twitter @hardyjournalism.