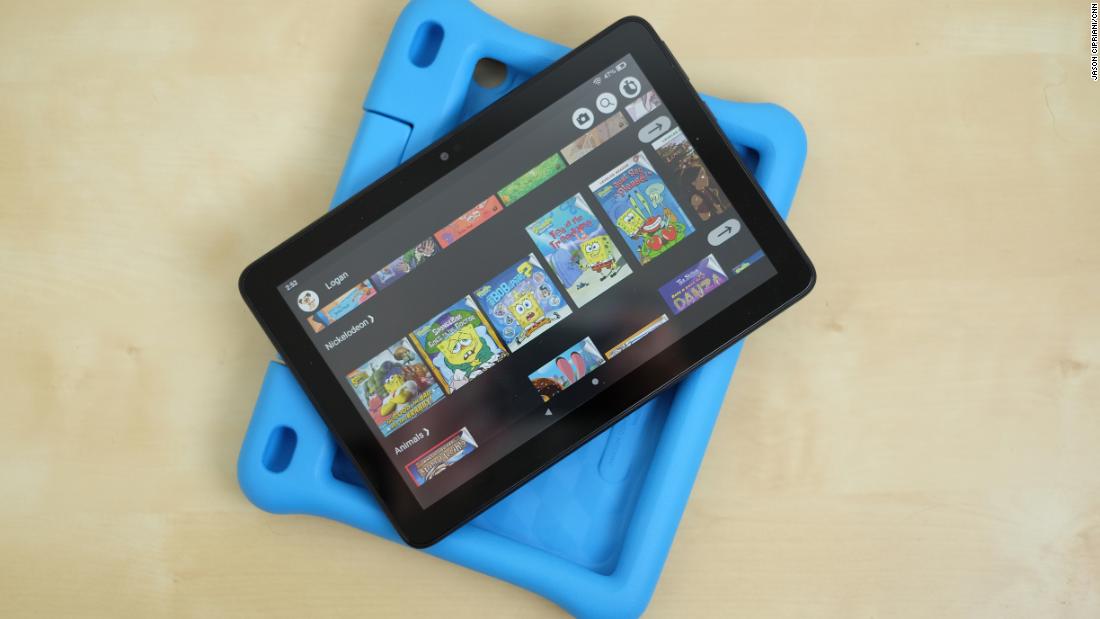 Last week, we took a look at Amazon’s new Fire HD 8 and Fire HD 8 Plus tablets and came away impressed. They look great and are affordably priced. What’s not to love?

The new Kids Edition version is more or less the same as the standard HD 8 tablet, but with a bunch of goodies specifically designed to keep you and your kids happy. Here are some of our first impressions after a few hours of use.

The new Fire HD 8 is a looker

Don’t let the big clunky case fool you. Like the standard HD 8 and HD 8 Plus, the Kids Edition has a new design that’s tremendous. Instead of looking like a bulky and boxy slab of plastic and glass, this tablet has rounded edges, the front camera has been moved, and the overall look and feel of the HD 8 line as a whole is incredibly sleek.

Of course, with the case on it, you won’t get to see all of the new design. The Fire HD 8 that’s included in the Kids Edition bundle has an 8-inch screen, 32GB of storage, 2GB of memory and up to 12 hours of battery life. You won’t get wireless charging like the HD 8 Plus has, but you do get a USB-C port.

The case has two cutouts below the speakers, giving the sound a little extra boost, which can be helpful for kids who may be dancing around — as they do — while they watch videos or listen to music.

What you get for the added cost

The Fire HD 8 Kids Edition is more expensive than the standard HD 8 or HD 8 Plus, but you get a lot of extras to make up for that added cost. For starters, you get a soft case that doubles as a stand that should help protect against accidental drops that will inevitably happen with kids.

On top of that, you get a two-year worry-free guarantee for the tablet itself. If your kid steps on it, smashes it on the ground or drops it in the swimming pool, Amazon will replace it free of charge. You’ll have to send in the damaged device, so this doesn’t cover loss or theft, but the peace of mind in knowing that if it gets broken, Amazon will replace it, no questions asked, is a big selling point.

Lastly, you’ll get a one-year subscription to Amazon’s FreeTime Unlimited service. Included in the service are parental controls to limit when and what your child can do on the tablet, as well as access to curated apps, books, podcasts and videos.

It’s not fast, but it doesn’t have to be

The Fire HD 8 isn’t the fastest tablet you’ll ever use, especially if you’re coming from an iPad. But does it have to be? We don’t think so. Kids don’t really care how fast an app loads, or how many apps can be left running in the background.

All they care about is getting to their books, games or videos and having fun. The Kids Edition, which has its own interface for children that makes it easier to navigate and find items, delivers that experience.

The Fire HD 8 Kids Edition, thus far, appears to be a steal. Between the new design, improved performance, and all the extras that you get, it should be an easy decision for parents.

Heck, you can get two Fire HD 8 Kids Editions for $209.98, as long as you don’t mind mixing the blue, pink and purple case color options. And you still get the worry-free guarantee along with FreeTime Unlimited.

We plan on more testing, with kids of course, and will have a full review soon enough. In the meantime, if you’re already convinced the Fire HD 8 Kids Edition fits what you’re looking for, you can order from Amazon right now.

Note: The prices above reflect the retailer’s listed prices at the time of publication.