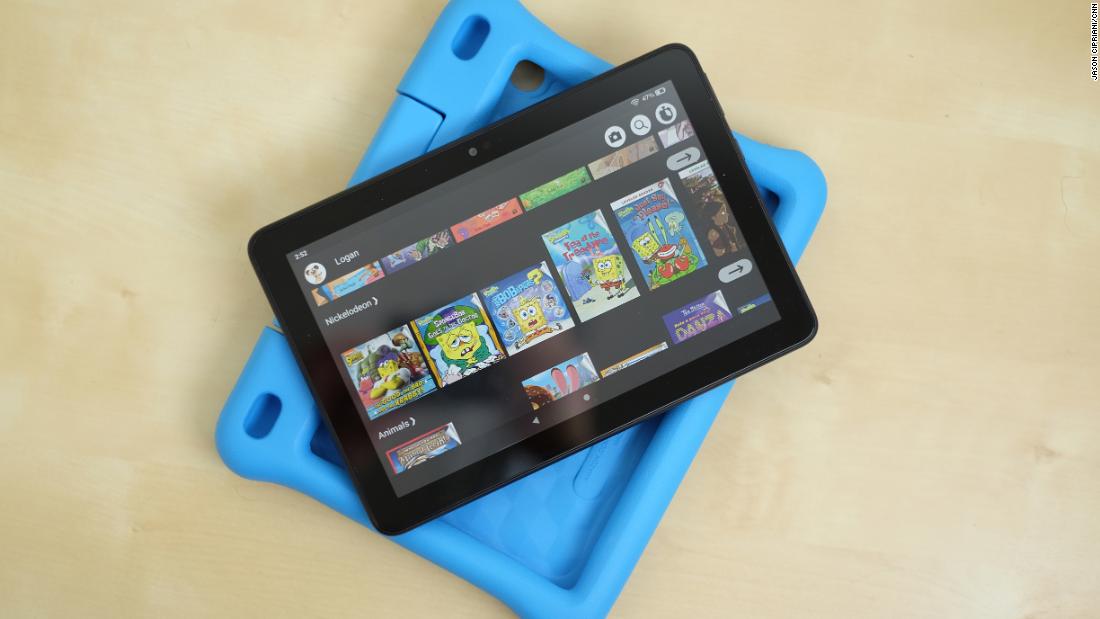 Amazon’s Fire HD 8 and HD 8 Plus are two incredibly affordable and capable tablets. So much so, CNN Underscored just named the HD 8 Plus our top pick for budget tablet.

Due, in part, because of its $89.99 starting price point, the HD 8 is a natural consideration for parents who are tablet shopping for their kids. If that’s you, don’t rush out and buy the standard Fire HD 8 or, even, HD 8 Plus for your kids.

Instead, consider the Fire HD 8 Kids Edition. It’s a little more expensive but includes some features and guarantees that justify the added cost.

What makes a Kids Edition model so special?

The Kids Edition bundle of the Fire HD 8 is $139.99, compared to the standard price of $89.99 for a stand-alone version of the same tablet. Here’s how Amazon justifies that $50 premium.

Arguably the most attractive part of any Kids Edition device you buy from Amazon is the two-year worry-free guarantee that comes with it. If at any time during those two years the tablet breaks, whether it’s from your kid throwing it across the room, or it’s accidentally dropped in the pool, Amazon will replace it for free, no questions asked.

Additionally, the Kids Edition comes with a case. There are three different colors of the case, including blue, pink and purple.

Finally, you also get one year of Amazon’s FreeTime Unlimited service. FreeTime Unlimited provides parental controls along with access to Amazon’s kid-friendly library of books, videos, Audible books, apps and games. A catalog that totals 20,000 items, according to the company.

After the year of FreeTime Unlimited expires, you’ll pay $2.99 a month to keep access to the service.

We’ve used FreeTime Unlimited for the past several years and can say Amazon’s parental controls combined with the curated library is one of the best implementations we’ve used.

You set up a profile for each child that will be using the — you can also control their use on Echo devices, Fire TV, Kindle, Android and iOS — by assigning an age, setting usage hours including a bedtime when the tablet will lock itself, add or remove specific content and limit or approve access to specific apps, like the web browser or camera.

With a profile setup, you can then use the Parents Dashboard to view usage and adjust controls.

The controls aren’t the best part, though. You can view the specific apps or books your child is spending their time in, and the Parent Dashboard will provide you with questions to ask your child about it. For example, if your child has been reading “Diary of an 8-bit Warrior,” the Dashboard suggests asking “Why does Runt want to be a warrior? What does he need to do to be one of the top five students?” along with a couple more questions.

Without actually sitting down and reading the book yourself, there’s no way you’d know what to ask about, other than “How’s the book?”

As we noted in our Fire HD 8 review, you shouldn’t expect this tablet to be extremely powerful or impressive. That said, you and your children will have no issues using Amazon’s own suite of apps and services, along with the apps that are available in Amazon’s Appstore.

The Fire HD 8 runs on Android, but Amazon has built and customized its own operating system on top of it, called FireOS. Those customizations mean you won’t find any of Google’s own apps, like YouTube Kids, in the Appstore. But, you will find most of the staple apps like Facebook and Zoom for the adults, and Roblox for the kids.

Because not all developers list their apps in Amazon’s Appstore, we are unable to run Geekbench 5, our standard benchmarking program to measure performance.

Loading and switching between apps isn’t going to blow you away with speed, but after a day or two of using the tablet, you won’t even notice the slight delay.

The 8-inch display has a resolution of 1200×800, or just slightly higher than 720p HD. Text is clear, but not overly sharp and colors are bright, but not what we’d call vivid. It’s good enough, though.

You only have one storage option and that’s 32GB. You can add up to 1TB of additional storage via the microSD card slot, which is more than enough for pretty much any game, book or video your child can consume. There’s a headphone jack, USB-C port for charging and data transfer, a power button and volume controls on the left side of the tablet when you’re using the case’s built-in stand.

As part of CNN Underscored’s testing, we run a battery life benchmark that involves playing the same video on repeat with display brightness set to 50% and airplane mode enabled. We ran the same test during our regular HD 8 and HD 8 Plus review, with the tablets lasting 9 hours and 40 minutes and 9 hours and 38 minutes, respectively.

The Kids Edition, however, lasted 10 hours and 41 minutes. It’s unclear why there’s any difference in battery performance since it’s effectively the same exact tablet as the Fire HD 8. Regardless, our tests don’t show that any of the Fire HD 8 tablets lasted the advertised 12 hours, although nearly 11 hours of use is nothing to discount.

The Fire HD 8 Kids Edition combines an attractive price with peace of mind, parental controls and insight into exactly what your child is doing on their tablet.

Between battery life and slow but consistent performance, the Fire HD 8 Kids Edition is sure to make any parent — or child, for that matter — happy.

If you need more than one Kids Edition, you can buy two Kids Edition tablets, mixing and matching any of the colors, for $209.98. You aren’t limited to the color combinations that are shown on the Amazon listing. Just add two tablets to your cart and you’ll see the discount at checkout.

Note: The prices above reflect the retailers’ listed prices at the time of publication.