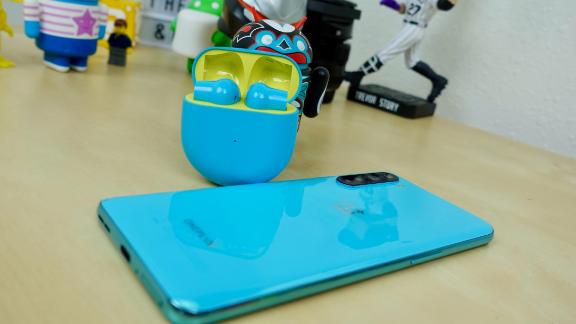 OnePlus is best known for its smartphone lineup, and rightfully so. The OnePlus 8 and OnePlus 8 Pro, and even the OnePlus Nord — a budget-friendly phone that launched in India and Europe — provide an exceptional experience and value. And now OnePlus has brought that same philosophy to completely wireless earbuds with the $79 OnePlus Buds.

The Buds launched alongside the Nord, but unlike the phone, the Buds are available in the US right now in white or gray. (The cool blue color is only available in the same areas as the Nord.)

We’ve been testing the OnePlus Buds for a few weeks now, using the wireless earbuds paired to a OnePlus Nord, an iPhone 11 Pro Max and an iMac.

The end result? Well, we don’t want to ruin it, but spoiler alert: At $79, these earbuds are hard to beat.

The OnePlus Buds look like a mix of Apple’s AirPods and Huawei’s FreeBuds 3. They’re made of plastic and lack removable ear tips, making them a one-size-fits-all earbud. On the outside is a flat surface, giving you a target to tap on when you use the touch control gestures.

The charging case flips open and magnetically holds each bud in place. There’s an indicator light on the front and a button that’s used for pairing or resetting the Buds on the back. A USB-C port on the bottom of the case is the only way to charge it.

Inside each Bud is a 32mAh battery, with a 420mAh battery inside the case. In total, OnePlus estimates 30 hours of total use when additional charging via the case is included. The Buds should last seven hours before needing a recharge (more on this below). It takes around 80 minutes to fully charge the case and Buds.

We tested the Buds on several occasions, for several hours at a time, and not once did we feel any discomfort. Normally when testing new earbuds, there’s a period of time where our ears get sore as they adjust. However, it wasn’t until after the second day of over five hours of constant use that we realized that wasn’t the case with the Buds.

Because the Buds fit our ears so well, we didn’t have any issues with them falling out while walking or even while on a brief jog. However, if you struggle with the likes of Apple’s EarPods, you may have similar issues with the OnePlus Buds.

The Buds aren’t what we’d call stylish, but they don’t look horrible either. They’re unapologetically wireless earbuds, and we can’t fault them for that.

Initial setup is a breeze with an Android phone — just open the case and wait a few seconds for an alert on your phone letting you know the Buds are available. On a non-Android device, you’ll need to hold the button on the back of the case in order to start the pairing process. Even then, that process takes just a few extra seconds.

How do they sound? Surprisingly good. The Buds fit our ears really well, forming a seal, which helps with sound quality. But we were pleasantly surprised by the Buds.

For example, when listening to the opening song on Logic’s farewell album, “No Pressure,” the bass is present but not overpowering, as is often the case with low-end headphones and earbuds. The drums in the background are clear and crisp.

When paired with a OnePlus 7 or OnePlus 8, the Buds gain Dolby Atmos support. While we didn’t have a chance to test out this functionality, hearing the Buds without Dolby Atmos support gives us confidence that the improved sound quality will only make the Buds even more appealing to use.

For sound quality, we still prefer the Apple AirPods Pro or the Samsung Galaxy Buds+ over the OnePlus Buds, but that said, we would not complain one bit if the Buds were the only pair of wireless earbuds we had to use on a long trip.

Battery life has been solid, matching OnePlus’ seven-hour estimate. Add in the charging case, and a total of 30 hours of music or podcast listening is realistic.

However, the touch gestures are an area we would love to see improved. Currently, you have to double-tap either Bud to interact with them. The traditional single tap to pause/play, double tap to skip a song and triple tap to go back a track isn’t possible.

Instead, a double tap on either side will trigger the pause/play action.

In order to take full advantage of the OnePlus Buds, you need to use them with a OnePlus phone. They use Bluetooth 5.0, so they’ll work with any Bluetooth device that can play music. But you’ll need a OnePlus 6 or newer in order to install firmware updates and customize the gesture controls.

Even when paired to a OnePlus phone, you’re still limited to using only double-tap gestures. But instead of having both earbuds act as a pause/play button, you can set each one to skip a track, go back, trigger the voice assistant or pause/play.

Hopefully OnePlus adds to the gesture controls, bringing its core experience more in line with what pretty much every pair of wireless earbuds available right now can do.

If you own a OnePlus phone and want a pair of wireless earbuds that work seamlessly with it, then the Buds make a lot of sense.

Heck, they even make a lot of sense for someone who wants decent sound and solid battery life without having to spend a lot of money.

That said, if you want better sound quality and more versatility, and budget isn’t a factor, the Galaxy Buds+ or AirPods Pro are the way to go.

At $79, the OnePlus Buds are an easy budget pick.