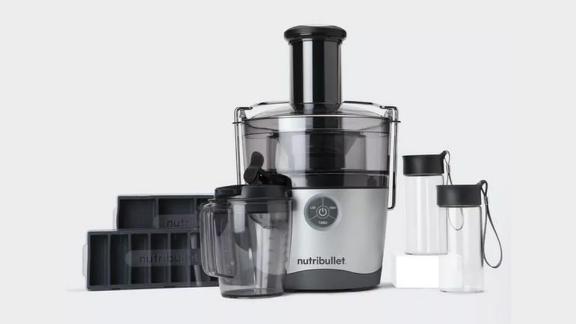 The NutriBullet Juicer and the NutriBullet Juicer Pro are both designed to juice any produce thrown their way. The base model features a 1.5 liter pulp and juice basin and an 800 watt motor, while the Pro model boasts a slightly larger 2 liter basin and more powerful 100 watt motor, but either will have no trouble pulverizing fruits and veggies. The Pro also has a turbo speed option, which may come in handy for hardcore, frequent juicing aficionados, whereas the base model only has high and low speeds.

Both models come with a food pusher (the Pro’s is a dual-size pusher — one pushes down larger fruits, and the other provides a narrower chute option for smaller produce like berries or celery) , 26-ounce juice pitcher and pitcher lid with froth separator, cleaning tool and recipe book. The Pro also includes 2-ounce and 4-ounce freezer trays (which can be used to create juice ice cubes, allowing you to cool off your beverages without diluting them or add a juicy boost to plan old water) and two glass juice bottles, so you can store even more concoctions. Not to mention, all the parts and accessories are dishwasher save for the simplest cleanup possible.

NutriBullet sent over the Juicer Pro for me to try out, and it truly is a simple appliance to put together. The three pieces — the basin, the lid and the pusher, plus the stainless steel sieve that actually pulverizes the produce — all fit together and click into place with ease. I also appreciated the metal bar that holds the lid in place during the juicing process; the juicer won’t even turn on if it’s not locked into position. In terms of size, I wouldn’t call the juicer small, but it certainly isn’t as large as some of the other machines on the market.

The high and turbo speeds came in handy for juicing tougher produce, like carrots, but the low setting was more than sufficient for softer fruits like apples and watermelon, which were completely ground up in seconds. In fact, if you use the higher speeds for especially juicy fruits, you might get some splatter from up under the lid. Meanwhile, the basin expertly keeps pulp at bay during the juicing process, and the ample 2 liters proved to be really useful when juicing veggies that don’t necessarily yield a ton of juice. For instance, I was able to juice about six apples, 10 medium-size carrots and a bundle of chard before needing to clean out the pulp.

The included pitcher fits perfectly underneath the juicer’s spout, thanks to an indent in the machine, and the spout itself features a latch that stops any unwanted drips from dropping onto your countertop.

While perhaps not the most advanced juicer on the market, the NutriBullet Juicer and Juicer Pro are certainly up to any basic juicing task, thanks to their straightforward design and operation, and at $99.99 and $149.99, respectively, they’re certainly on the affordable end of the juicer spectrum. Even the most amateur juicer will have no trouble extracting their next healthy beverage with the help of these new NutriBullet releases, so score yours today and start sipping on some fruits and veggies in all their liquid glory.