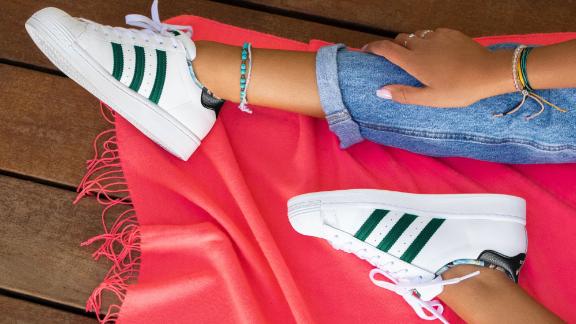 CNN Underscored partnered with adidas to create this content. When you make a purchase, CNN receives revenue. CNN news staff is not involved in the selections or product reviews. For more on what we do and how we do it, visit our About Us page.

When it comes to iconic sneakers — heck, when it comes to the entire history of footwear — you’d be hard-pressed to come up with a more beloved or influential shoe than the adidas Superstar.

Believe it or not, the sleekly stylish shoe is celebrating 50 years since its release, bestowing street cred on generations of athletes, fashionistas and genuinely cool people.

It’s sometimes tough to remember just how revolutionary this fashion phenomenon was when it first dropped five decades ago. The first leather low-top basketball shoe designed specifically for the game, it introduced the rubber shell toe, while its simple but unmissable triplet of zigzag stripes stitched onto the smooth cowhide leather uppers clearly (but elegantly) signaled that this was a product of quality.

Adding to features — plus the rubber soles that didn’t leave skid marks on the court surface —- instantly endeared it to professional basketball players who, until then, wore less protective canvas shoes. No less than NBA legend Kareem Abdul-Jabbar became its biggest champion.

Soon fans noticed that three out of every four players wore Superstars on the court and took the wardrobe cue from their b-ball heroes.

The Superstar traveled off the courts in the 1980s and was embraced by the hip-hop community, becoming part of the signature style of Run-D.M.C. In 1986, the New York City trio released “My Adidas,” their ode to the Superstar. In July of that year at Madison Square Garden, they played the song while encouraging the crowd to show off their Superstars and other adidas gear, a milestone in hip-hop history.

Superstars became the understated signifier of coolness among young people everywhere, from basketball courts to skate parks, from schools to city stoops. Like the little black dress or your favorite pair of broken-in jeans, the Superstar is one of those rare fashion unicorns that hasn’t gone out of style.

The modern take on the Superstar, the Superstar II, keeps the classic details like the three-stripe edging, herringbone cupsole, leather upper and rubber shell toe, but it adds extra padding for more protection and cushioning. Partnerships with everyone from Pharrell to Bape ensure that this remains a shoe on the cutting edge.

To celebrate 50 years of footwear lightning in a bottle, adidas has rolled out new colorways and collaborations to appeal to Superstar fans of all stripes (pun intended), from a K-pop-inspired set with platform cupsoles, enlarged X’s and happy orange stripes to the white-on-white with blue accents of the Superstars as reimagined by megastar Twitch streamer and gaming influencer Tyler “Ninja” Blevins.

“Stars Wars” fans can let their feet take them to a galaxy far, far away with the Darth Vader-themed black Superstars with Sith Lord red details, while Disney’s Mickey Mouse Superstars let the world know you’re still listening to your inner child. And fun new takes like polka-dot or camo prints, boot and sandal variations and more mean that the Superstar look adapts to your preferences and lifestyle without sacrificing the shoe’s signature cool.

There’s no point in encouraging you to go out and add adidas Superstars to your closet — chances are you already have a pair — but the 50th anniversary is a great excuse to remind yourself why it’s such an iconic shoe and consider continuing the love affair with a new take or two on a classic style.