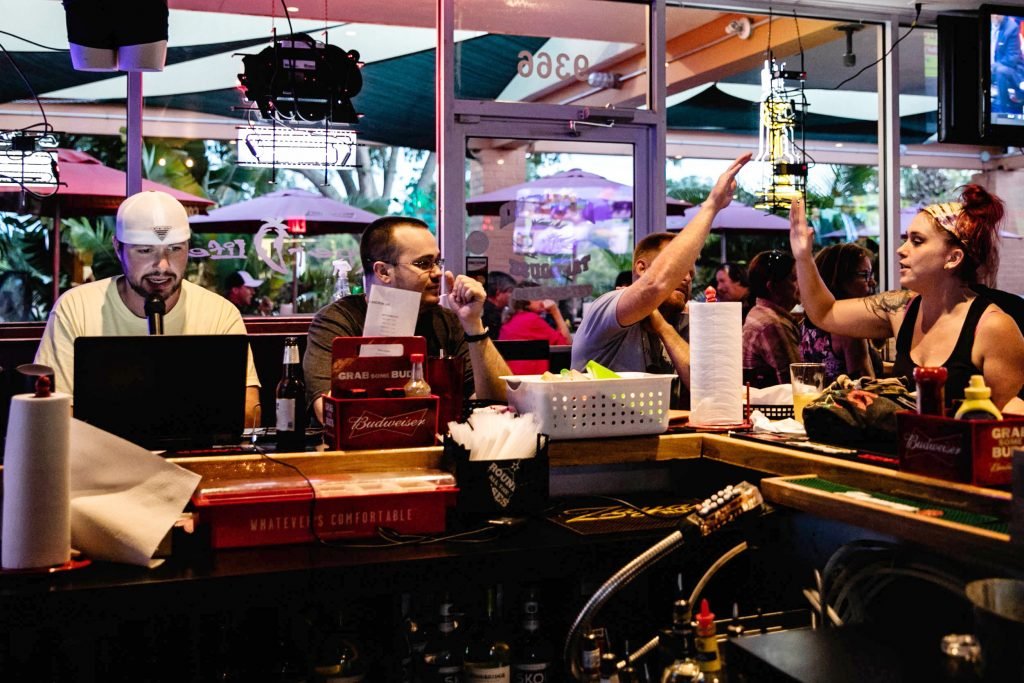 Editor’s note: This story was originally published in August 2018.

As the teams arrive for Trivia Night at the Angry Pepper Taphouse in Seminole, Florida, they find Greg Tipton sitting at the far corner of the bar putting together the final touches of tonight’s game.

He’s dicing up sheets of paper to make answer slips, sharpening dull pencils, testing the restaurant’s audio system and checking his questions one last time. As he walks around the high-top tables and booths passing out packets filled with game supplies, he welcomes his regular players and encourages newcomers to give his game a shot. And when the clock strikes 7 p.m., it’s time for trivia.

Tipton hosts Trivia Night at the Angry Pepper every Wednesday. A high school math teacher by day, he uses his questions to put restaurant patrons’ knowledge to the test. This side hustle pays him an extra $125 a week.

“I care about the product,” Tipton says. “I want it to be good. I want people to have fun.”

Tipton says he had no intention of being a trivia host. When he started picking up bartending and server shifts at the Angry Pepper a few years ago, the restaurant already had one.

After the existing trivia host decided to move on, Angry Pepper owner Al Cowan asked Tipton if he wanted to take over. Cowan figured that the public speaking skills Tipton had developed as a teacher would make him a great host.

Tipton thought it over and realized it was “a no-brainer” to accept the gig — it would allow him to make some extra cash that he could put toward supporting his family.

Learning the ropes was stressful — especially with a live microphone in his hand.

Early on, if he asked a question with any shred of wiggle room in the answer, he would get 30 pairs of angry eyes glaring at him after revealing it.

Or worse, those aggravated people would march up to his corner spot at the bar and passionately defend their answers. Tipton credits the conflict resolution skills he uses with his students to amicably resolve these disputes.

“It’s kind of a natural transition,” he says. “Teachers have that command over a classroom. In here you have a classroom that’s basically eating and drinking.”

Over time, Tipton found his rhythm as a host and figured out what type of questions his players enjoy. Now he looks forward to Wednesday nights.

“When I feel like we had a good week of trivia, I feel really positive about it,” he says. “I’m like, ‘You know what, I think everyone had fun; we had good questions,’ and that’s a great feeling, especially when they come up to you —– being on a losing team  —– and they’re like, ‘Hey, I like your questions this week. That was fun.’”

It’s All About the Questions

Tipton keeps a basket of answer sheets and file folders for both regular teams and newcomers. Aileen Perilla/The Penny HoarderOn Monday nights, the pressure starts to build for Tipton to write questions. He knows that if he comes up with two, he’ll get in the zone and be able to write the remaining 14.

His questions start off easy and get progressively more difficult. If they’re too tough in the beginning, players might bail. Part of Tipton’s job is to keep people engaged so they stick around for a chance to win the prizes (and maybe order another round of food and drinks).

Early in the game, Tipton might ask: “The TV show ‘That ‘70s Show’ was set in what state?” (Wisconsin)

Then in the later rounds, he’ll hit them with something like this: “Who was Al Gore’s running mate during the 2000 presidential election?” (Joe Lieberman)

The questions that Tipton gets the most joy in creating are meant for the middle of the game, when he wants about half the teams to get them right. He calls these the “I knew that” questions, because that’s what the players say when they get them wrong.

For example: “What is the name of the famous house that architect Frank Lloyd Wright built in Pennsylvania in 1935?” (Falling Water)

Tipton describes hearing the mix of half the room cheering and the other half groaning as “a euphoric feeling.” “It’s a good feeling because [the players] respect those type of questions,” he says. “I think in that moment, they realize that was a good question.”

“Every now and again, there are president questions where we’re like ‘Aw… I don’t know the 11th president’…. but he keeps it fun and keeps the game moving,” says Brahm.

Playing for a Little Respect Around the Neighborhood

As many as 25 teams play during the peak winter months when seasonal residents are typically back in town.

“It’s not exactly high stakes, but people like to come in first, second or third place,” Cowan says.

The competition is fierce, as players lean across the table to whisper to their teammates.

“What is the name of each of the seven dwarfs?” Tipton asks. The teams write down as many names they can remember on their slip, then hand in the answer.

The noise in the restaurant dims as Tipton reads the list, followed by an audible moan when he says “Bashful” and “Doc.”

Even the players feeling grumpy about getting the Snow White question wrong leave smiling.

Matt Reinstetle is a former staff writer at The Penny Hoarder.