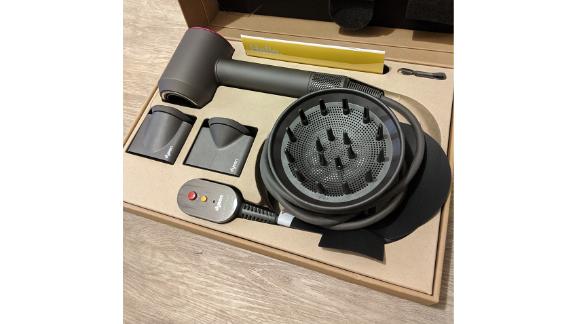 Well, four years and plenty of curiosity later, three editors here at CNN Underscored decided to take the plunge and see for ourselves if the Dyson Supersonic was worth its high cost. With the pandemic keeping one of us from her regularly scheduled salon blowouts (don’t judge; it’s called self-care!) and the holidays just around the corner, we thought there was no better time to test it out — to see if it’s a product worth treating ourselves or a lucky giftee to.

The Dyson Supersonic upon arrival in its box, with attachments
PHOTO: Emmy Favilla

First things first, a little about the history of this nifty hair tool: The technology behind the creation of the Dyson Supersonic is nothing short of wildly impressive, thanks to the work of 103 engineers over four years. The hair dryer measures air temperature a staggering 40 times per second (per second!) to ensure it doesn’t cause heat damage to your hair, meaning with regular use your strands will remain healthy and shiny. According to Dyson, in fact, it’s said to increase smoothness by 75%, increase shine by 132% and decrease frizz and flyaways by up to 61%. And, oh yeah, it touts itself as being the fastest-drying hair dryer on the market, with a tiny motor that’s six times faster than standard hair dryers.

So: What does this actually mean in practice?

It means the Dyson Supersonic is an impossibly lightweight, quiet powerhouse of a hair dryer that has essentially ruined all other hair dryers for us. We are believers, we are converts, we are Dysonites. (Is that what superfans of this appliance are called? That’s what we’re calling them.)

Our reviewer with thick, curly hair after using the Dyson
PHOTO: Emmy Favilla

Three editors, all with different hair types — one with curly, fine hair, another with 4b curls who wears extensions and one with wavy-to-curly, thick, dry hair — can attest to the product’s claims that drying time was reduced dramatically across the board. Like, half-the-usual-time dramatically. Most impressively, it managed to dry our hair in record speed without the tool ever feeling like it was blowing out air all that hot, even at its highest setting. We didn’t realize this until we tried drying half of our hair with the Dyson and half with a standard hair dryer, and felt like our fingers were, comparatively, on fire as we used the latter. With four heat settings (including the essential cool blast to set your style) and three speed settings, it’s easy to tone things down if, say, you have a sensitive scalp and want to lower the temperature at certain points. And it’s much quieter than other traditional hair dryers we’ve used; one of us even used it when we had our mom on FaceTime and were able to chat with no complaints. The future is here!

The device uses what’s called Air Multiplier technology to create a high-pressure, high-velocity stream of air. What helps to make styling more precise is the handful of magnetic attachments included with the Supersonic: It comes with a smoothing nozzle and styling concentrator, which both help focus the airflow, as well as a diffuser for defining curls and waves. At checkout, you can also add on a complimentary wide-tooth comb attachment (ideal for curly and coily hair) or a gentle air attachment (good for fine hair and sensitive scalps). The Supersonic comes in four chic colorways, plus two gift-edition colorways, and has a two-year warranty.

One of our editors, a self-proclaimed newbie to proper blow-drying her curly hair, was able to fully straighten her hair by using just her hands (no brush!) along with the Supersonic, and the result was strands that looked noticeably shinier and fuller. For our testers with curls, it seemed like one pass effectively dried our tresses when separated into small sections, and it gave our hair more bounce and movement than any other dryer we’ve used before. Our tester with coily hair said she’d never use another hair dryer again when she has extensions in — the wide comb attachment worked like a dream, quickly leaving her hair feeling super soft without too many passes. It also worked well on her heat-trained leave out (i.e., natural hair at the front).

Bottom line: We think the investment in the Dyson Supersonic is well worth it if you’re someone who blow-dries your hair regularly and/or someone who’s looking for a tool that’ll give you the closest result to a salon blowout in your own home — with lightning speed. Who couldn’t benefit from cutting their hairstyling routine time in half and reducing heat damage to boot? Its lightweight design makes it especially easy to maneuver, and its attachments make it suitable for hair types across the spectrum. The Supersonic makes a fantastic gift idea for the hair-obsessed loved one in your life — or, you know, for yourself, since it’s 2020 and you deserve to treat yourself to something nice for making it through this year.

And now through November 22, you can win one in this month’s Underscored Faves Giveaway! Here’s how to enter.